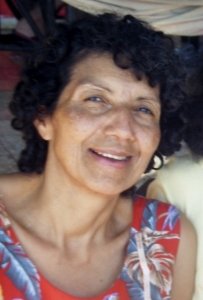 “I have developed as a person, overcoming traumas from the war, being able to feel more balanced, more stable. Victimization, crying all the time—this doesn’t help us here in El Salvador. We need women to be connected with new ideas, new goals. We need our children and youth to envision new things, to build a more just society. We have to keep fighting for that, because, since the 1980s, that has been our dream.” —Melba Jiménez

I met Melba Jimenez in in the fall of 2006. She had recently lost a sister to breast cancer. I had survived colon cancer the year before and she became interested in knowing that cancer was not necessarily a death sentence. We walked through the busy streets of San Salvador and talked. She had been in the guerrillafor 12 years, first as a driver, then as a medical technician. In 2006 she was working with Pro-vida, an NGO that she had helped to found. Pro-vida trains local health workers to monitor the health of pregnant women, to give pap smears and to do AIDS education. Pro-vida also tests water quality all over the country and shows people how to purify water by heating it on their rooftops.

When I came back to El Salvador in January 2007, Melba attended my Focusing workshops. She was not enthused about Focusing and encouraged me to teach Nonviolent Communication instead. I had taken a workshop in NVC from Peggy Smith, who was a second grade teacher. Peggy made her classes very clear and fun. Following Melba’s suggestion, I started sharing a few NVC games in my workshops and peoples’ eyes started lighting up. I found that the NVC card game was a great way to get people to start talking about their feelings and needs in a non-threatening way. Melba went on to organize 6 workshops for me for the staff and volunteers of Pro-Vida clinics all over the country.

Melba had an incredible network of friends and comrades from the Salvadoran Civil War (1981-92). I came to know El Salvador as a country of strong, spirited people, who had risked everything to bring social and economic justice to their country. When I returned in 2008 as part of a human rights delegation, I went to Melba’s home in Colonia La Libertad, and we sat facing each other at sunset, not saying a thing. It was as if we were sharing a silent knowing that we would work together.

The beginnings of Focusing El Salvador

Her tall, elegant daughter, Yara, had just graduated from college when I returned in 2009. Melba was working in the administration of the huge, crowded central market. She arranged workshops for all her colleagues at the market, and Yara became my assistant in teaching there and in our continuing workshops at Pro-Vida. Yara proved to be a natural and confident teacher and workshop leader.

I learned that Yara’s father had been killed in the Civil War and that Melba’s second daughter Susana’s father had also been killed in the war. Melba’s sister, their aunt Yuni, took care of the children while Melba went back to her post with the guerrilla. This led to feelings of estrangement and abandonment in her children, with whom she was living when I met her. I remember many hours around the dinner table, just reminding Melba to stop and listen to her adult children, rather than drifting into her war stories. Over the years, the family became closer. They were also able to renew a relationship with Melba and Yuni’s estranged sister, who had been against their involvement in the war and with labor unions.

In 2009, the FMLN party, the party of the former guerrilla, won the presidency of El Salvador.  I had a lot of hope that in 2010, we could show the new government the benefits of Focusing and Empathic Communication. At that time, Melba was working as a technician in the poor peoples’ hospital, Zacamil. She brought me in to give workshops to the staff there too! Yara and I continued our teaching partnership and, with Melba and Yuni, formed Nuevos Rumbos(New Directions). We were united in our belief that Focusing and Empathic Communication were essential practices that would make peoples lives better. Melba and I tramped around to government offices and NGOs, trying to show them how our workshops could make a difference in mental health and in violence prevention. But they weren’t ready for us yet.

Yara and Melba taught Focusing at a church in the fall of 2011. Melba also got her old friend Paty involved. Paty Dubón is a sociology professor. She and Melba started doing a weekly Changes group at the National University that lasted for a couple of years and helped a lot of students. Yara got a job with the new government, in the Secretariat of Citizen Participation, Transparency and Anti-Corruption and works there still.

One time Melba and Yuni and I were at the beach. I had a playful urge to cover them with sand and they let me! I piled handfuls of heavy wet sand on top of them until only their faces were showing. I even buried their hair. Lying down as they were, as if they were in ancient sand-colored sarcophagi, I believe I saw their original faces—truly the faces of eternal Mayan goddesses.

I gave some workshops to a core group of people in San Salvador in 2011. By then, Melba had become fascinated with Focusing and wanted to learn everything about it. She had become a member of Eeq’anil, a unique organization that was founded by an old friend of hers, a German woman who had been part of the Salvadoran guerrilla. Anna, her friend, had become acutely aware of the plight of social workers, community organizers, psychologists, youth group workers, who needed support to avoid burning out. Eeq’anil was designed to provide them with tools for self care, and sponsored everything from workshops in indigenous cosmology to Focusing. In 2012, they brought Suzanne Noel to El Salvador for a 3–day workshop in her How We Heal method. Eeq’Anil continued to fund Focusing workshops with me in 2014, 2016 and 2018.

In September of 2012, Melba’s daughter Yara was given the Janet Klein scholarship to the Weeklong, where she was certified as a trainer. Melba was also certified in absentia. Melba began to give workshops every other week with women members of community organizations in the countryside. After the Focusing International in Argentina in 2012, I brought back Isabel Gascón’s lovely Focusing exercise on disc, and Fernando Acuña’s book, Focusing, un proceso hacia la integridad as well as Maria del Lujan Paunero’s book of experiences with teachers and students in Argentina, published by the Argentinian Teachers Union. All of these were a great support and inspiration as Melba began to teach.

Thanks to donations from our loyal supporters in the international Focusing community, Melba was able to be paid for her workshops. I have many reports of her trainings with women in the villages of Buen Pastor and Hector Lara, and with children in the village of William Fuentes[1] from 2012-2014.

In the summer of 2014 Melba was hospitalized for the first time with a mysterious liver disease. After awhile, she recuperated and went on to participate in a 3-year project run by ACISAM, the Salvadoran Association for Research and Training in Mental Health, aimed at giving psychosocial skills to women in three different prisons. Melba incorporated NVC and Focusing in this project wherever she could.

As that project terminated, Melba became involved with a newly-formed association of veterans of the guerrilla. They had finally been recognized by the government during the administration of President Sánchez Cerén, a former teacher, who, along with many other concerned citizens, had been a leader of the guerrillaforces. Melba started sharing Empathic Communication and Focusing with the staff of the veterans association and with groups of women veterans in the provinces. These trips proved to be taxing for her, as she now had to be very careful about her diet, hydration and rest. Earlier this year, she told us that she would no longer be able to teach outside San Salvador, because she needed to take care of herself.

She was very happy with a group of women who would gather at her home on Friday afternoons to study and practice Empathic Communication and Focusing. I was able to attend the group when I was in San Salvador in November.

Anywhere I traveled with Melba, we were frequently surprised by a warm greeting from a compañero or compañera from the war. I want to share a memory that for me characterizes Melba and the veterans of the Salvadoran guerilla. In 2013, Melba and I had given a workshop in Cinquera, a small town where Melba had been stationed during the war in the 80s. There was a forest reserve just outside the town, and we decided to take a stroll there after our workshop. As we walked down the dirt road toward the reserve, we came upon three huge cows ambling along the road. We moved over to the side to let them pass. They were followed by a very small, wizened campesinowho was herding them home. As the man passed us, he looked at Melba and said, “I know you.” She looked at him, and they realized that they had been part of the same health team during the war. I could feel the deep bond between them. They told each other their real names—during the war, everyone had used a nom de guerre; Melba was “Nora”. They told each other about their children and where they lived, Melba in the city, and the man in the countryside. The palpable ethos of equality, teamwork and shared ideals came through in those moments.

If it had not been for Melba’s heartfelt interest in Focusing, there would be no Focusing community in El Salvador. The experiment of teaching Focusing through organizations was made possible by her organizing ability, her wide network of contacts, the love and respect that people felt for her, and her ability to communicate the transformation that had occurred in her life.

It was very sad to learn that she finally succumbed to her liver disease on December 23, 2018. Juan Carlos Hernández, Heazel Martinez and Eduardo Esquivel will become certified at the Weeklong in Chile in 2019. Juan Carlos led a ceremony of gratitude for Melba on the day after Christmas. Yuni talked of how she and Melba supported each other as sisters. Others spoke of Melba as a friend and companion in the fight for a more just society, of her work with community organizations, and as the person who had introduced them to Focusing. As Juan Carlos says, “We all thanked her for her great love. Then we took a moment to respect her need for rest, and her new presence and belonging in the realm of wisdom…We ended by honoring her words that express how we visualize her today: “Peace, joy, life, love, community.”

Thank you, Melba, for helping me realize my dream of making Focusing available to people who might not find it otherwise. Thanks for including me in your family. Thank you for being an inspiration to so many.

Categories in the Blog